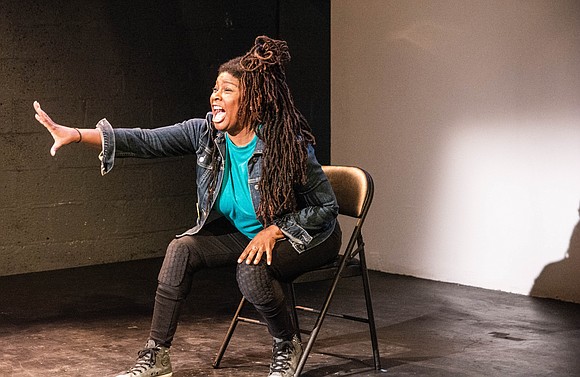 The death of a mother is something that is devastating, especially when that mother was someone who truly embodied what a mother should be—someone who takes care of everyone; makes you feel special; gives you unconditional love, acceptance, support and advise. The loss of such a person is something extremely difficult to deal with and it’s also hard to find a way to move on with your life and in some cases take up the responsibilities that your mother carried for decades. Now, if you have a person who is an artist, you may find that they deal with that pain, sadness and grief through creative, at times funny means and by that I mean creating a play, which dramatically and heartbreakingly shares their real life story. A person who did this and was able to set the mood and tone from the moment she came out on stage was Helena D. Lewis as she recently performed “SHEnanigans”, at the Wild Project at 195 E 3rd Street. Her one-woman show about the death of her mother Helen at the age of 76.

If you have suffered the death of a parent, you may have seen yourself on that stage. As Lewis talked about the difficulty of dealing with much older and distant siblings, you may have had older siblings that you dealt with also and she may have made them come to mind. Whether you can identify with Lewis’ story directly or not, you would have identified with it on so many other levels, because it was so real, so clear, so well written and performed. Lewis also managed to thoroughly present the emotional trauma that she went through as she tried to perform CPR on her mother, who was a nurse, but she couldn’t save her.

Everything about this production was a healing process for Lewis. You felt it begin from the time you looked at the program and saw a real photo of she and her mother, when Helena was a child. Throughout the play as she portrayed members of her family that included her Dad, Mother and even the family dog, enormous pictures on the backwall let you visually see who she was portraying and it truly worked to connect you to the words even more. Lewis has done something that can’t be taught, you have to feel it in your soul and have the commitment to put it on paper and then bring it to the stage. She showed a vulnerability to share what hardships her family experienced with the death of her mother and to reveal that she was left to take care of a father she didn’t have a close relationship with and in fact, had resentment towards.

Lewis, pondering what we all wonder, what happens when we die, tells us her thoughts by depicting her mother on a heavenly cloud, speaking to Jesus and waiting to speak to God about Helena’s well-being. She depicts the afterlife as a place where family members will be reunited, there will be no pain and suffering, you can make potato salad if you want to and you can see your family on earth and be concerned about them. She also shared that over time she was more than capable of taking on all the responsibilities of her mother in taking care of and even getting to understand her father and the family spoiled dog.

I love that Lewis created “SHEnanigans” because it is a healing, funny, therapeutic production to experience. And it had poignant direction by Rome Neal. It was presented by Wild Project and Crazy Girl Productions. I completely hope that this production is mounted again, so that audiences have a chance to see it. It’s not a surprise that Lewis can create an in-depth, engrossing piece like this since her life also includes being a social worker and she’s currently studying for her doctorate in Social Work. To keep abreast of Lewis and what she’s doing next please visit www.hdlpoet.com.