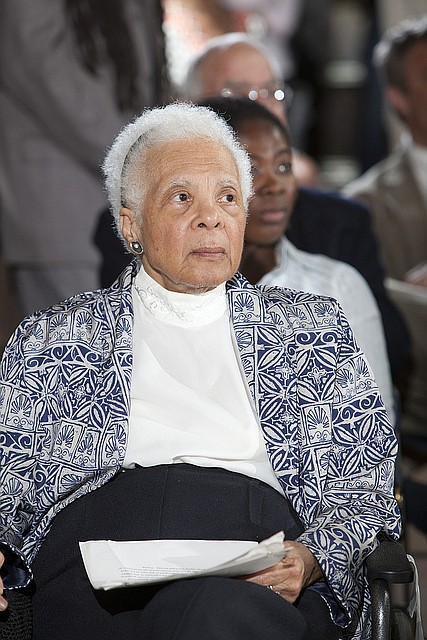 Each day when you think you’ve discovered your last “Black First,” another one pops up. Reading about the death of Doris Louise Wethers, I learned that she was the first Black attending physician at Saint Luke’s Hospital in 1958. Obviously, with most such achievers, there is much more to their ascendance, much more than a seemingly easy climb to the top.

During an oral history interview, Wethers revealed her early passion for medicine. “I’ve wanted to be a physician ever since I can remember,” she said. “When I was growing up my dolls were always in sick beds. I’m sure a lot of it had to do with my father, because he was so beloved by all of his patients, and he obviously loved medicine.”

With her freshly minted medical degree, Wethers interned at the newly desegregated District of Columbia General Hospital. Her entry there was facilitated and made easier because she was a Black woman. “It was one of the few times, except in grammar, where two negatives make a positive,” she told New York magazine in 1973. (Interestingly, on the My Life website, she is listed as Caucasian.)

As we noted above, Wethers was the first Black attending physician at Saint Luke’s Hospital and later served as medical director for Speedwell Services for Children from 1961 to 1973. It was during this period that she was also director of pediatrics and opened a sickle-cell anemia program at Knickerbocker Hospital, Sydenham Hospital and St. Luke’s Hospital Center, all within a very productive decade and a half. It should be noted that for a time she had a private practice, hanging her shingle not too far from her father’s office.

But it was in 1979 after receiving a grant for sickle-cell research that she began a pursuit that earned her national acclaim. Besides her phenomenal research on the dreaded diseased that was particularly prevalent among African Americans, Wethers co-founded the Foundation for Research and Education in Sickle Cell Disease with Drs. Yvette Fay Francis-McBarnette and Lila A. Fenwick.

In collaboration with her colleagues, Wethers produced findings on the disease that intensified further studies and led to better treatment procedures for people afflicted with sickle cell anemia. “People with this abnormality produce blood cells which can be formed like sickles or crescents,” according to experts on the disease. “Because the cells are inflexible, they’ll clog capillaries and deprive tissues of blood and oxygen, resulting in organ harm, stroke, blindness, extreme ache and demise. There continues to be no remedy, though bone marrow transplants involving stem-cells have proved profitable in some experiments.”

Several research sites offer examples of Wethers’ research and offer abstracts of articles she wrote for medical publications. Here is one that appears on Researchgate.net. “Over the past 25 years,” she wrote, “morbidity and mortality have decreased significantly in children with sickle cell disease, and screening tests are now available to diagnose the disease in newborns. The incidence of sepsis caused by pneumococcal and Haemophilus influenzae infections has declined because of the prophylactic administration of penicillin soon after birth and the timely administration of pneumococcal and H. influenzae type b vaccines. Optimal nutrition can maximize growth in children with sickle cell disease, and timely screening can identify complications such as retinal damage and chronic renal involvement, thereby ensuring prompt treatment. Family physicians and parents who have been educated about sickle cell disease can detect acute, life-threatening complications such as splenic sequestration crisis and acute chest syndrome at their onset, thereby allowing treatment to be instituted without delay.”

In 1987, Wethers acted as the chairwoman of a panel on sickle-cell screening commissioned by the National Institutes of Health. One of the findings by the panel was the recommendation that all newborn babies, no matter their race or ethnicity, be tested for sickle-cell anemia, by now the medical profession was aware that the disease was not exclusively the problem of African Americans. By 2006, the testing of babies was in effect in all fifty states.

“She was on the front line of patient care long before any federal funding for sickle cell disease,” said Dr. Clarice D. Reid, the previous nationwide director of the sickle-cell illness program of the National Heart, Lung and Blood Institute, a part of the National Institutes of Health. “She played a key role in many of the clinical advances of the ’80s and ’90s.”

She added: “Dr. Wethers was the consummate clinician and a fearless advocate for improved patient care.”