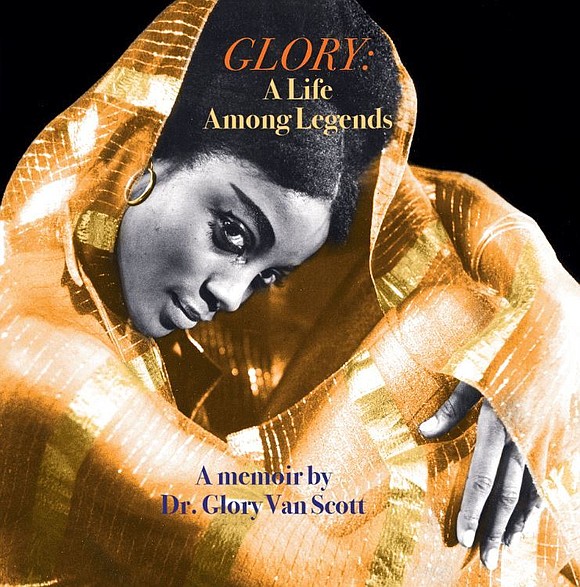 In her absolutely engrossing memoir, “Glory: A Life Among Legends,” Dr. Glory Van Scott utilizes a number of motifs—photographs, poems, essays, reflections and praise songs—all of which taken together replicate her multifaceted career.

One of her most poignant recollections—and this is no easy choice for a woman who is a highly acclaimed dancer, poet, playwright, educator and founder of a youth theater—occurs during the funeral of her esteemed colleague, dancer and choreographer Talley Beatty. Dr. Van Scott had wanted a flock of doves to be released at the close of the services but the animal agency said it couldn’t be done because it was raining.

Glory was the last to speak at the services and when she finished with her arms held skyward, a flock of at least 60 blackbirds, bluebirds and gray birds simultaneously fluttered above her and the mourners. “The entire scene was surreal,” she recalled. “Nobody spoke at first. Everyone looked on in amazement.” For her, “I just took it as Talley wanting me to have my birds, and so he sent them.”

The book abounds with such absorbing moments as she recounts her remarkable dance career, from “Porgy and Bess,” “The Great White Hope,” “Showboat,” “The Prodigal Son,” “The Wiz” and countless others. Her photos with her mentor and muse Katherine Dunham, the warmth that exudes between them, says what passages of words can only approximate. And for those who think they are fully informed about the tragedy of Emmett Till, who was Glory’s cousin, she provides a moving testament, including a personal photo that few have ever seen.

During a recent interview, she said Till’s death did not crush her, but motivated her to thrive and “push past this grief” and to make a mark in several fields of endeavor, to assist others who are facing life’s challenges.

And readers will be struck by her generosity and concern for those on the brink of desperation in her essay “The Sweetest Kiss.” About eight years ago, on a cold November day, Glory was hurrying to the subway at Columbus Circle when she encountered an old lady with a cup begging for money. Rather than saving the 20 dollars she had for Thanksgiving pastry, Glory dropped it in the woman’s cup. The woman was stunned and when Glory looked back at her she blew the sweetest kiss. Glory said that she “realized I was already in the midst of Thanksgiving blown there by the little lady’s gossamer kiss.”

Complementing these wonderful, bravura episodes, are loving testimonials from a coterie of notables, including author Erica Jong; dance authority Jennifer Dunning; and her dearly beloved George Wein. And there’s even an unintentional nod to the prevalence of green nowadays with the “Green Book” film and the Green New Deal proposed by representatives in Congress with Glory’s calling the Rev. Melony McGant the Green Diamond. It was from the coaxing of McGant that Glory finally acceded to her demands and completed this book—which has all the potential to be a fine motion picture.

But until then, the stills she has selected, the words she has composed, and the memories she has harnessed are more than sufficient in showcasing a life that resonates with brilliance long after her cousin’s tragic death.