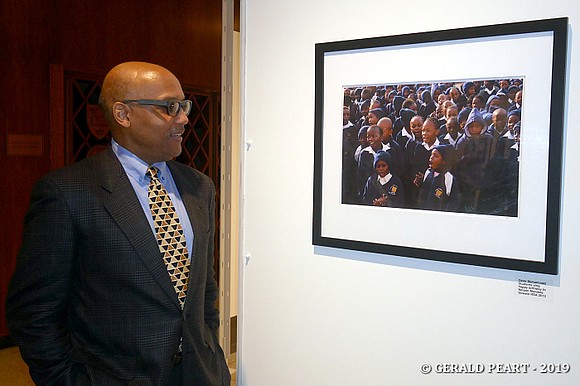 There are two exquisite exhibits up through most of Black History Month, from one end of Manhattan to the other. In Chelsea, at the David Zwirner Gallery, there’s “God Made My Face: A Collective Portrait of James Baldwin” curated by Hilton Als. In Harlem, at the Interchurch Center, is “A Life in the World,” the photographs of Pulitzer Prize-winning photo-journalist Ozier Muhammad.

In the first part of the Baldwin exhibition, entitled “A Walker in the City,” the esteemed writer whose iconic brilliance has resonated globally for years, his image covers the wall and encircles the room. On one wall, his visage is warmly recalled by his mentor, artist Beauford Delaney, and nearby is the photograph of him by Richard Avedon, who was a fellow student when they attended DeWitt Clinton High School in the Bronx.

Not too far away is an example of Baldwin’s doodling, giving his gift of language a visual expression, which morphs to film in “Colonialism,” the second part of the exhibition. Baldwin’s artistic vision is conveyed in several formats, including moving shadows on the wall by Kara Walker and minstrel-like paintings by Glenn Ligon of Malcolm X, who not only debated Baldwin but also came to admire him. One of the most compelling displays here is a film by Ja’Tovia Gary in which Ruby Dee recalls a poignant moment and Assata Shakur recounts her escape from prison.

Unlike the collection of artists and their depictions and memories of Baldwin, the photos at the Interchurch Center are entirely Muhammad’s, but in their variety, taken together, they have a similar broad, encompassing swath of African and African-American history and culture. What Muhammad says in the subtitle of the exhibit summarizes the collection: “Bearing witness with a camera from the South Side of Chicago to South Africa.”

The most engaging photos come from his days in Chicago, where we see a long line of men, possibly the Fruit of Islam from the Nation of Islam, of which Muhammad’s grandfather, Elijah, was the founder.

His portrait of Nelson Mandela is emblematic of his style and sensitivity to light and color, and the image of Barack Obama, checking his cellphone, totally relaxed, is a rare moment in his busy life.

“I was born and raised in Chicago, one of the most segregated cities in the United States, then and now,” Muhammad relates in the exhibit’s brochure. “One could say I was ‘woke,’ then, as some are now in this era of Black Lives Matter. I felt and feel today, that journalism and photojournalism can be used as a force for good, to transform society by exposing civil and racial injustices, in every aspect of human endeavor; from public and private industry, and government, big and small.”

One artist from Harlem who said he only wanted to be a witness, which he was with his words and insight, and the other from Chicago, documenting with his cameras, was no less a witness to Black life, its struggles and accomplishments.