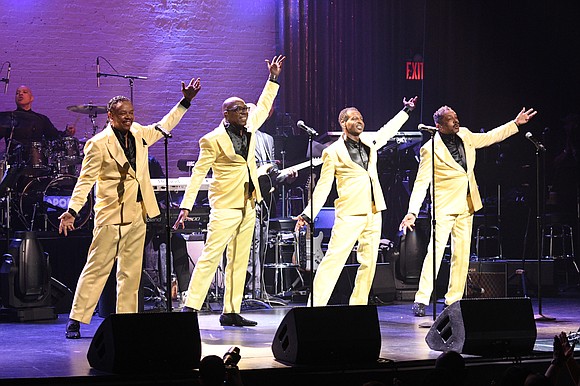 The benefit concert was hosted by actress and comedian Amanda Seals. This year’s gala theme was “Icons Revisited,” paying tribute to legendary artists who played a vital role in the Apollo Theater’s history. The works of Bill Withers, Aretha Franklin, Donnie Hathaway and Billie Holiday were highlighted at the event.

Estelle, Jose James, Liv Warfield, Morris Day and The Time, Kelvin Rolston, Jr., Caleb Hawley, Cheryl Pepsii Riley, and James Harkness from the cast of Broadway’s Ain’t Too Proud: The Life and Times of The Temptations all took the stage.

A performance was also given by the current touring version group of the Temptations consisting of Larry Braggs, Willie Green, Ron Tyson, Terry Weeks. Temptations founder Otis Williams was also on hand. The Motown singing group was recently inducted into the Apollo’s Walk of Fame.

Apollo legend and musician Ray Chew served as music director for the evening.

The event raised a total of $2 million. Proceeds from the celebration will support the nonprofit organization’s year-round, artistic, education and community programming.

“We are thrilled to once again celebrate the legacy of the Apollo Theater at our annual Spring Gala,” said Jonelle Procope, President & CEO of the Apollo Theater. “Each year we take this opportunity to bring together people from different communities - entertainment, philanthropic, business - to help support the Theater. And there’s not a more fitting way to do that than with a night of music and entertainment and celebrating our friends who do so much to give back to the arts.”

Vista Equity Partners was recognised by the Apollo Theater with the Corporate Award. The firm’s founder, Smith, recently donated $40 million to graduates at Morehouse College to pay off their student loans.

"I grew up on the sounds of musicians who performed at the Apollo Theater, so it's an incredible honor to be recognized by an institution that has meant so much to me personally,” said Smith. “We hope our support can help the Apollo continue to be both a legendary venue for the performance arts and a cultural landmark that helps bind together the vibrant Harlem community."

Following the concert, attendees were treated to an after party with music provided by DJ D-Nice at a special tent in the Adam Clayton Powell, Jr. State Office Building Plaza.