Duo Port Mande uses music to bring many worlds together 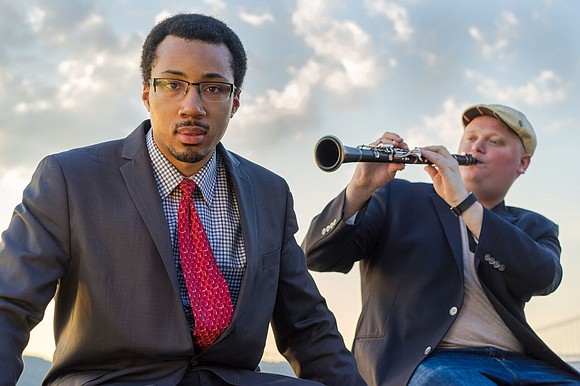 Although both clarinetist Jeremy Jordan and pianist Mark Dover in the past lived in Los Angeles, it took moving to New York City for them to meet. The move for each was serendipitous, as it allowed them the opportunity to meet and collaborate. Explains Jordan, “New York is big but everything is easy to get to unlike say, Los Angeles, where the city is a geographic sprawl. Because of that, different little sects and pockets form. In New York, you can get on the train and experience whatever you want to.” The opportunities to travel from their Inwood Manhattan and Astoria Queens neighborhoods gave Dover and Jordan a chance to develop a collaboration borne of a similar vision of the world.

Jordan and Dover’s experiences as musicians had a much more interactive, diverse flavor. Recalls Dover of their early New York years, “There was kind of like a collective of musicians that were coming mostly out of the Juilliard School and a little bit out of Manhattan School of Music. They would put together these like cabarets almost, and it would be in some apartment in Brooklyn or Inwood, or a warehouse. There would be shows where it would be classical musicians coming together, jazz musicians, hip-hop artists, stand up comedians—kind of like a variety show.”

Their collaboration, which the public will be able to enjoy this April 6 in concert at National Sawdust in Williamsburg, is marked by each of the musicians’ extensive experience and broad musical tastes. The duo will be joined by a host of guest artists for a program that ranges from 21st century classical, to jazz, to hip-hop. Selections include original and traditional works, music by Schumann and Ragonese, and more.

They’ve both worked in jazz, hip-hop, classical, pop and gospel. Michigan native Dover grew up on the Motown sound. “I grew up,” he says, “listening to Smokey Robinson, The Temptations, Four Tops, Marvin Gaye, Martha Reeves. I think naturally that drifted into 90s R&B and hip-hop.” Jordan, who hails from Chicago and began playing piano as a toddler, was heavily exposed to gospel as a child. “Both of my parents were music ministers at different churches. I guess in a way they were like Bach, modern day choristers.”

As to what he wants audiences to take away from hearing them, Dover says, “We want to show people that this music that we all celebrate is actually more similar than it is different. And that our real joy and love for all types of music can be combined into something unique that respects the individual genres, but also celebrates them.” For Jordan, it’s also about shifting the perspective of the audience’s experience. “There’s now this invisible curtain between the audience and the musicians. We want the audience to feel they’re as much a part of it as we are. Before recording music, people could only hear music by making it themselves or going somewhere to hear it.”