Who is Robert F. Smith? 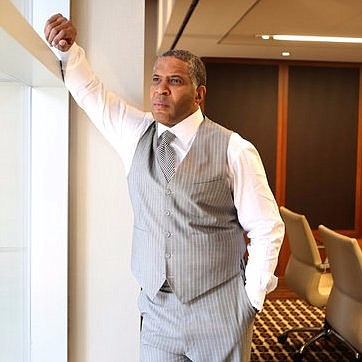 Black billionaire Robert F. Smith surprised the Morehouse College 2019 graduating class when he announced plans to pay off the student loans of the 400 graduates at the all-male historically Black college.

Reports indicate that the announcement came as a surprise when Smith was making his commencement speech shocking students and college administrators. Smith was immediately thrust into the spotlight with headlines about who he is and his wealth.

Smith was born December 1, 1962 in Denver, Colorado. His parents were Ph.D. holding educators. When he was an infant, his mother carried him during the March on Washington where Dr. Martin Luther King made his “I Have a Dream Speech.”

He a businessman and investor

Smith is the founder, chairman and CEO of private equity firm Vista Equity Partners. His firm focuses on financing and forwarding software and technology-enabled startup businesses, as well as passive equity investments. Smith founded the company in 2000 and has offices in Austin, Chicago and San Francisco.

He was a chemical engineer holding patents and an investment banker

Prior to starting his own company, Smith worked for Air Products & Chemicals, Goodyear Tire and Rubber Company and Kraft General Foods as a chemical engineer. He earned two United States and two European patents while working for the companies. He also worked for Goldman Sachs in technology investment banking.

Smith is a member of Alpha Phi Alpha Fraternity, Inc., the first African-American, intercollegiate Greek-lettered fraternity. He was initiated into the fraternity in 1982 at his alma mater Cornell University where Alpha Phi Alpha was founded.

Giving to Morehouse College students is just one of Smith’s many philanthropic acts. He’s also donated funds towards prostate cancer treatment for Black men and for breast cancer research for Black women. In 2018, Smith donated $1 million to the Cultural Performance Center at the Denny Farrell Riverbank State Park in Harlem. He is the first African American to serve as board chairman of Carnegie Hall.

He has several homes

He’s married and the father of five children

Smith is currently married to healthy living advocate Hope Dworaczyk. The couple wed in 2015 and have two children together. He was previously married to Suzanne McFayden Smith with whom he has three children.

Reports indicate that Smith partakes in fly fishing in his spare time.