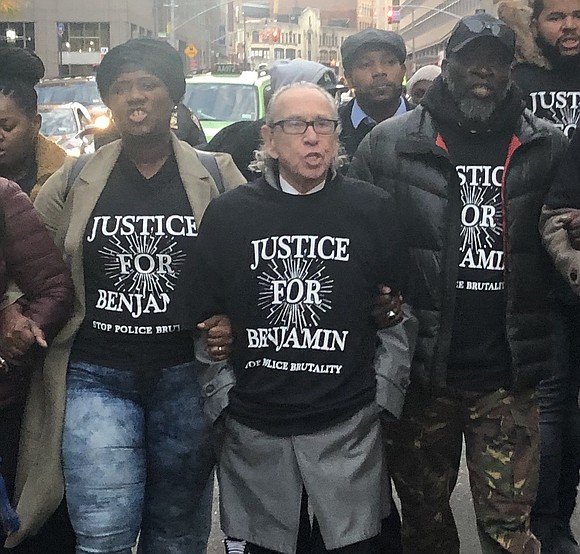 A march and news conference was held in front of the 84th Precinct this past Nov. 4. Advocates protested and marched from Brooklyn’s Jay Street–MetroTech subway station to the 84th Precinct to demand the termination of the NYPD police officer who assaulted 15-year-old Benjamin Marshall Oct. 25.

The Rev. Kevin McCall and attorney Sanford Rubenstein were among several others who stood in solidarity with Anthony and Victoria Noel, the parents of the victim.

“We came today to serve notice on the NYPD, not just serving a notice—to let them know that we came in peace, because we don’t believe in violence or being disruptive. We believe in doing things the non-violent way,” said McCall. “We will not stand for the injustice of a child, of any child, being brutalized by the NYPD. The NYPD, we pay their taxes, they are not above the law and it doesn’t matter what color you are, it’s about respect at the end of the day.”

Marshall, who attends Downtown Brooklyn’s Science Skill Center High School, was assaulted by a police officer from the 84th Precinct and was immediately arrested. As seen in a cellphone video recorded by an unknown witness, Marshall was walking past a brawl between several NYPD officers and Black teens at Brooklyn’s MetroTech subway station, when he was suddenly targeted and punched in the face by one of the male officers.

The family of Marshall is now suing for $5 million with the help of Rubenstein. “What does justice for Benjamin mean? First it means disclose the name of the police officer who committed this assault...holding a police officer accountable just like any other person in this city.”

The family, friends and supporters proceeded to take a knee when the father of the victim, Anthony Noel, stated his understanding for former American football quarterback Colin Kaepernik’s kneeling back in 2016 in protest against police brutality against African Americans and racial injustice in the United States.

“They [children] are supposed to know and feel that when they see a police officer it’s not to be afraid because they are put there for their protection. But on the other hand, that is not the case,” stated Victoria Noel.

“We will not stop until this officer is removed from the force. He needs to be fired,” said McCall. The main call is for New York City to do the right thing and fix the NYPD police department.