Aileen Cole Stewart, a Black nurse during WW I and the 1918 pandemic 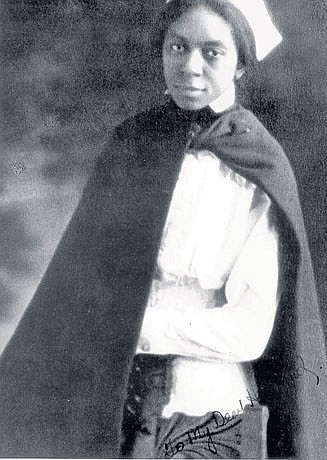 A little more than a century ago in 1918, the same year the U.S. entered World War II, the Spanish influenza swept across the nation like it’s doing today. The war and the pandemic, much as it is nowadays, delivered a devastating double whammy, only this time the virus companion is an unrelieved economic inequality.

Another, but brighter similarity to those troubled times, is the courageous commitment of African American nurses, who, risking their lives, volunteered to be front line workers to halt the spread of the disease and to comfort those afflicted.

That contingent of nurses included Aileen Cole Stewart. She had passed her nursing exams in Maryland and Washington, D.C. just as global conflict was mounting, the influenza spreading, and the pressing need for nurses and doctors on the frontline. As a member of the Army Nursing Corps, Stewart helped to establish a field hospital in Cascade, Virginia. Certified by the American Red Cross, she immediately, along with a veritable squadron of other African American nurses, joined in the fight against the dangerous influenza.

Much of what I know about Stewart (born c. 1893) and her life and legacy—and there is only scant information about her youth—is distilled from an article by Kerri Lee Alexander, when she was a fellow at the National Women’s History Museum (NWHM). “Little is known about Aileen Cole Stewart’s early life, but she did write about her experiences as a young nurse in training,” Alexander wrote. “She attended the Freedmen’s Hospital Training School in Washington, D.C. and studied at the hospital’s training center at Howard University Medical School. She participated in the three-year program for African American nurses to earn their diplomas. Before she was accepted into the program, she had to prove herself during a three-month testing period. During this time, she was considered a ‘probationer.’ Stewart had to take care of patients by making beds, taking temperatures, serving meals and cleaning the toilets. At the end of the three months, she started classes as a freshman. Her time in training was strict, and anyone who broke the rules was publicly punished. Stewart recalled that the nursing students were not allowed to socialize with the medical students, interns or other hospital workers. If they broke any of the rules, the director of the school would take their nursing uniform cap and they had to work ‘capless, in disgrace.’”

It was the kind of stressful orientation she needed to survive the challenges of war and the onslaught of the epidemic. Along with her attendance to classes, Stewart, as a freshman, had to work 12-hour shifts. A night shift student nurse was often responsible for 30 patients, and only in the case of emergency would assistance be provided by a graduate nurse. Things were even more challenging during the nurse’s second year where no graduate nurse could be summoned during an emergency. By the last year of the program, Alexander explained, “nurses were trained for major and minor surgery. Stewart successfully completed her training and applied for the Army through the American Red Cross. There was a desperate need for nurses in the army during World War I. However, the armed services were not integrated at the time, and African American nurses were not assigned to active duty.”

But in the fall of 1918, there was a dramatic change after soldiers and workers began to die in massive numbers. African American Red Cross nurses were suddenly desperately needed. One of the epicenters of the outbreak was in West Virginia, and Stewart and a coterie of Black nurses were dispatched to the region. Most hard hit were railroad workers, and the situation was increasingly bad with each passing day.

Stewart arrived in the small town of Cascade where she worked alone in the mountains. In December 1918, she began serving in the Army Nurse Corps with 17 other Black nurses. “Half of the nurses went to Camp Sherman in Ohio,” Alexander recounted, “and half went to Camp Grant in Illinois. Stewart was stationed at Camp Sherman, where the African American nurses lived in segregated areas. They were only allowed to take care of German prisoners of war and African American soldiers. Stewart said, “The story of the Negro nurse in World War I is not spectacular. We arrived after the Armistice was signed, which alone was anticlimactic. We had no opportunity for service above and beyond the call of duty. But each one of us, in the course of our professional relationships, did contribute quietly and with dignity to the idea that justice demands professional equality for all qualified nurses.’”

Beyond the turmoil that visited the nation 100 years ago, Stewart continued her career as a nurse working in the New York public health system. At the age of 68 she earned a degree in public health nursing from the University of Washington. Over the years, until her death in circa 1997, she maintained a dedicated relationship with the American Red Cross.