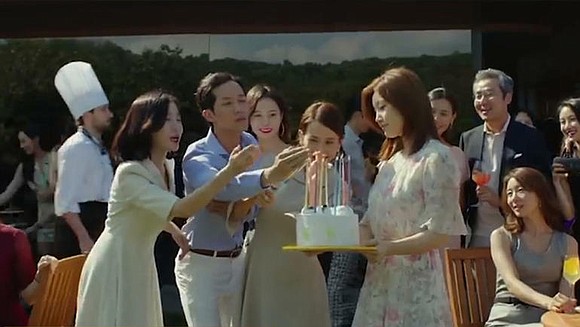 Korean director Bong Joon-ho (“Snowpiercer,” “Memories of Murder”) has made a new classic with “Parasite.” It’s hard to summarize what the film is about but in a pinch, I will stand on a tree branch and say that it is about class and the rage of those who are not rich. Class rage at its best but the film does not start that way. It begins with a look at a poverty-stricken Korean family, all victims of circumstance. At the helm is the patriarch (Song Kang-ho) who happily supports all of his kids’ achievements no matter how small. His daughter, Ki-Jung (Park So-dam), has forgery skills he admires especially because she’s faking something important for her brother Ki-woo (Choi Woo-shik).

The family lives in a “semi-basement” so very small but the four squeeze in making due. The mother is an ex-champion shot-putter Chung-sook (Chang Hyae-jin) who is desperate to find a job and free wifi. The fortunes of the family seem to shift when Ki-woo is offered the chance to replace a friend as the tutor for Da-hye (Jung Ziso), daughter of the wealthy Mr. Park (Lee Sun-kyun).

Ki-woo happily leaves his pizza box folding days behind exchanging them for leisure days with his lovestruck student and her equally naive mother Yeon-kyo (Cho Yo-Jeong), all living inside the Parks’ stunning home. Everything is going perfect for him but even better when he discovers that Da-hye’s hyperactive, “Indian” obsessed little brother Da-song (Jung Hyeon-jun) requires an art tutor. Ki-woo recommends his sister, lying and saying that she’s a college acquaintance named Jessica. Now, two family members are living in luxury.

The first act flies by as the scam expands and the lies compound. It’s not that rich people are mean or awful. They are not but there is something about how they hate poverty and the poor that gets under your skin. Bong builds the smallest moments into something monumental. There is violence coming for sure but the pace of it makes this film unique. If the devil is truly in the details then “Parasite” is feverously diabolic.

It’s humorous in the darkest sense. It rumbles like a growing earthquake and it growls even when the main characters are smiling. Nothing is what it seems. The clearest image in the murky world is that haves do not like the have nots. They are enemies in a never-ending undeclared war. Where should the hated land? With the people or with the system?

This question lands and swirls around the film’s unexpectedly moving final moments. Should we eat the rich—some say yes—but would we fill our bellies? Some say no, because as soon as you consume them you will be hungry again and so the cycle continues…or does it?