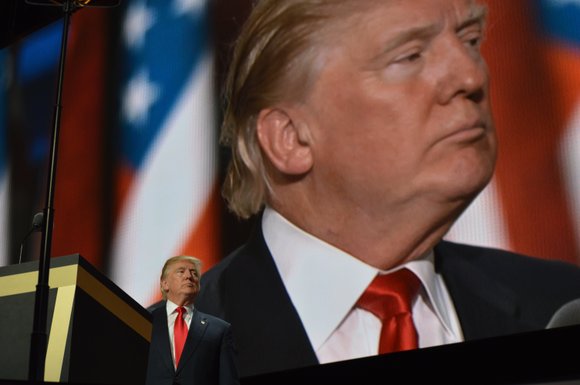 Donald J. Trump took the oath of office on Jan. 20, 2017 and became the 45th president of the United States. Many Americans were dismayed by the results of the 2016 presidential election; in fact, although almost 3 million more votes were cast for Hillary Clinton, Trump received the necessary electoral college votes to win the election. New Yorkers who were familiar with Trump were skeptical about what his future policies and practices would be as he ran on the theme “Make America Great Again.” We wondered, did this mean he was going to take us back to the 1950s when African Americans were required to sit in the back of the bus, lunch counters and movie theaters were segregated by race; women were expected to be at home in the kitchen, bringing up the children in a nuclear family while the man of the house went off to work and was counted on to bring home the bacon; LGBTQ+ members were in the closet intimidated by rampant homophobia and reluctant to “come out”; and, when most power in politics, business, education, media was concentrated in the hands of white men?

It is now a few days short of the third anniversary of the Trump presidency, a time that has been a tumultuous, stressful and for many a painful and exhausting era. A review of the last three years reveals:

Shortly after the Jan. 20, 2017 inauguration, the Trump administration removed all references to civil rights, LGBTQ+ rights, climate change and Spanish language content from the White House website. These symbolic acts were a bellwether for what was to come. In fact, the list of Trump policies and practices that are antithetical to American principles, values and constitutional provisions is extensive and unconscionable.

A trip down memory lane causes us to remember the following:

Travel Bans I, II and III (a.k.a the “Muslim Ban”); the demand for a wall along our Southern Border followed by a National Emergency Declaration when Congress refused to allocate funds for the wall and the administration’s questionable transfer of federal funds for the wall; the attempts to defund or place new conditions on distributing grants to Sanctuary cities; emolument clause challenges; DACA challenges; the proposed transgender military ban; attempts to add a new question to the 2020 census that asks, “Is this person a citizen of the United States?”; asylum restriction/bans and revoking the right to a bond hearing pending an asylum hearing; free speech/twitter bans; free press/revoking Jim Acosta’s (CNN) White House credentials; challenges to the Affordable Care Act; attempts to roll back on religious and moral grounds, a federal requirement that employers include birth control in their health insurance plans; attempts to create a “blanket” denial of access to abortion for unaccompanied minors; attempts to rescind Haitians’ protected status; and finally, last week’s military actions and threats against Iran which stem from Trump and his administration’s disdain for the 1973 War Powers Resolution as well as Article I, Section 8, Clause 11 which states Congress shall have the power “to Declare War.”

These challenges and attempts to undo policies and practices that embody the American principles of freedom, equality, justice, fairness and opportunity for all and such constitutional mandates as due process and equal protection under the law, free speech; free press; free exercise of religion, have been generally rejected, declared unconstitutional and/or illegal by federal district courts and the eleven U.S. Courts of Appeals.

The book is still open as to whether the U.S. Supreme Court will follow the lower federal courts decisions or will provide a safety venue for Trump administration policies and practices. To date, the Supreme Court has upheld Trump’s Travel Ban III; effectively allowing the ban on asylum-seekers to remain in the U.S. unless they were first denied asylum in Mexico or another third country and, lifted injunctions blocking the ban on transgender individuals in the military. The Supreme Court has recently agreed to hear three cases that raise the issue of whether Trump and his accounting firm are required to provide personal and business financial records pursuant to subpoenas issued by the New York County District Attorney and two U.S. Congressional Committees. The resolutions of these three cases will provide a window on the Court’s position on fundamental Constitutional issues that emanate from the Trump administration’s policies and practices, including separation of powers.

2020 will continue to be tumultuous. For the third time in American history the U.S. Senate will hold an impeachment trial of a sitting president: 1868––Andrew Johnson; 1998––Bill Clinton; and now Donald Trump. The articles of impeachment voted on by the House of Representatives include abuse of power, and obstruction of Congress caused by the president’s withholding of Congressionally approved funds for Ukraine and his attempt to involve a foreign country in the 2020 presidential elections.

The question that has been posed often during this three year Trump period is “What can I do?”

Here are some responses:

1) Encourage everyone to speak up in their communities. Please do not be silent during these days. Don’t give up! Speak up!

2) Protest. It’s our country. We believe in freedom, equality, fairness, justice and opportunity for all. We’ve fought for these principles. We’ve marched and protested for them. This nation and its principles and values have always been aspirational. We strive, as the preamble to the Constitution states, “to form a more perfect Union.” We have faced dark days before and we have prevailed. It is imperative that we prevail again.

3) Members of the U.S. Congress who believe in the country’s core principles and values should stand up during the State of the Union on Feb. 4 and turn their backs on Trump for 45 seconds (he is the 45th president) to demonstrate their opposition to his policies and practices.

4) Individuals across this country should leave their jobs, homes, schools for 4.5 minutes at noon on Feb. 4,  and hold signs in opposition to specific policies and practices that Trump and his administration have enacted, tried to enact or are planning to enact.

5) Go to declaration17.com and read about the federal court decisions in cases that have challenged Trump and his administration’s policies and practices during the past three years.

6) Watch the impeachment trial of Trump. Read about it.

7) Vote on Nov. 3, 2020. Our country, our rights and liberties may depend on the outcome of the election.

Norman Siegel is the former executive director of the New York Civil Liberties Union and a noted civil rights attorney.