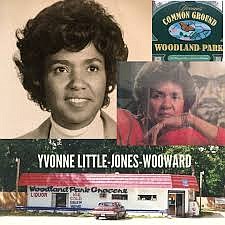 Yvonne Little-Jones Woodward and her store

Two weeks ago we featured the life and legacy of Ella Little-Collins, Malcolm X’s half-sister. Today Yvonne Little Woodward has the stage, and though she made her own mark in life, for the most part she distinguished herself outside the public gaze.

Born Yvonne Inez Little on Aug. 11, 1929 in Lansing, Michigan, she was the youngest daughter of Earl and Louise Little, and the second daughter of seven siblings. With her father having been found dead on street car tracks in 1931, and possibly murdered by nightriders or Klan members, and her mother institutionalized in a state mental facility in Kalamazoo, Yvonne and her siblings were eventually separated and made wards of the state and placed in foster care.

“My mother had a lot of pride,” Yvonne related. “She crocheted gloves for people…She rented out garden space and she sharecropped with the man who would come and rent garden space from her. We had a dump behind our house—and she rented that too.”

This division of family had a major impact on all of them, including Yvonne, according to her son, Steve Jones. “Even though she ended up in a good foster home, she remembers every night she had to sleep in the orphanage prior to that. She came from [an established] family, the first Black family to own cars, own property, and here had to go and become a ward of the state. Everything was taken from them.”

As her brother Malcolm Little acquired national recognition, particularly as Malcolm X, a member of the Nation of Islam, and later a prominent human rights activist, Yvonne comparatively quieter, was securing her place of recognition as the first African American telephone operator for Michigan Bell in Grand Rapids, Michigan in 1948. She would hold a similar distinction in Lansing, the place of her birth. A year later she married Robert Jones and settled in Grand Rapids.

“She knew if she didn’t do the right thing,” her son continued, “it would take years for them to take a chance to hire another Black operator. In Grand Rapids, the operators took a vote to see if the girls were willing to have a ‘Negro’ work with them. The vote was unanimous except one vote—and my mother found out who she was and won her over.”

Winning folks over to her point of view extended to her customers at her grocery store and members of her community through her civic involvements. According to Ilyasah Shabazz, her niece, her grandmother lived for a brief period in a space adjoining the store. Apparently, at Yvonne’s urging, Philbert had facilitated his mother’s release from the institution and Yvonne was the caregiver where she either lived with Yvonne or Philbert, depending on the source. When Spike Lee’s biopic of her brother’s life commanded the theater marquees in the nation, Yvonne took exception to his depiction of Malcolm as a pimp before being imprisoned. She told Lee that she was disappointed in his portraying Malcolm’s fellow inmate, Shorty, as the one who introduced him to the Nation of Islam. Her brother, Reginald, she said was mostly responsible for that. (Reginald died in 2001, and when Hilda died in 2015 at age 93, all of her brothers and her sister were deceased. The youngest brother, Robert, who was in fact a half-brother, died in Lansing in 1999. He was 61.)

Yvonne, often because of Malcolm’s acclaim, was called on to speak at various events in her community and elsewhere, especially where children were the principal audience. On these occasions, she would cite her parentage as well as her big brother’s achievements, which, as she often noted, stemmed from the activism of their parents, both of whom were deeply devoted to the ideas of Marcus Garvey and members of his Universal Negro Improvement Association. If there was one consistent factor in the Little family, their advocacy of self-determination was paramount.

“You see where he [Malcolm] got an early start crusading and fighting for the rights of people,” Yvonne said at one community event in Grand Rapids. “Malcolm had a lot of heart and insight into the future, present, and past problems.”


Like her son, her daughter Deborah Jones spoke fondly of her mother, noting, “She was always a very strong influence in my life—she taught us independence. She gave me my strength. She raised her children so we could carry on what she brought to us.”