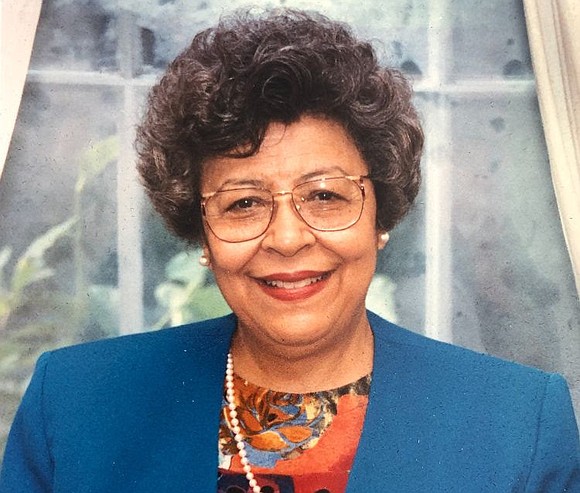 Whenever former Mayor David Dinkins mentioned his wife, Joyce, he referred to her as his beautiful bride, and she was indeed beautiful and bountiful too. That beauty and bounty now is part of her enduring legacy as she, at 89, joined the ancestors Sunday, Oct. 11 according to an announcement from Governor Cuomo.

“Very sad to learn of the passing of Joyce Dinkins,” the governor tweeted. “Born in NYC, she spent her time as its First Lady with grace & purpose—dedicated to education and a champion of literacy.”

More specifically, Joyce Burrows Dinkins was born in Harlem where she was raised in a very prominent and influential family. She was the younger of two daughters of Daniel and Elaine Neltrop Burrows, and began developing her educational acumen while a student at George Washington High School and later at Howard University where she received a Bachelor of Arts in Sociology.

A homecoming queen, she graduated from Howard in 1953, the same year she met and married David. From the very start, they were a dauntless duo, her insight matching and enhancing her husband’s ambitions. And on occasion her wit was equal to his. A gifted storyteller, David often recounted how lucky Joyce was to marry him and not a competing suitor. “See, if you had married him you would be the wife of a ditch-digger,” he boasted. “No,” Joyce responded, “If I married him, he would be mayor and you would be the ditch digger.”

This was just a portion of the repartee they shared over their long and productive marriage that was never more crowned than when David was elected mayor in 1989, New York City’s first and only African American to hold the office. Without missing a beat, Joyce assumed her duties as First Lady, expanding her position as a coordinator of Metropolitan Affairs in the New York State Department of Taxation and Finance. 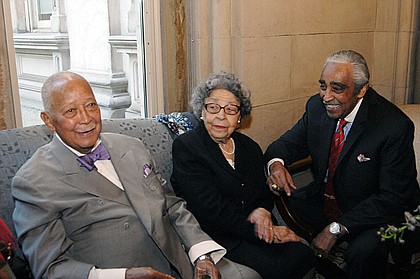 Now she could effectively initiate and promote her educational vision, her dedication to the arts for children and health care. Among the responsibilities she eagerly pursued was as honorary chair of the Mayor’s Task Force on Child Abuse, which of course dovetailed productively with devotion to the improvement of literacy for the city’s children. As Lynda Hamilton observed in her tribute to Mrs. Dinkins, “In 1990, she established ‘Reading is Recreation,’ a program that brought public school students to Gracie Mansion which expanded to provide special assistance to additional schools located throughout the five boroughs. In recognition of her love for our city’s children, the Joyce B. Dinkins Children’s Collection was established at the Schomburg Center for Research in Black Culture over a decade ago. The former First Lady was a member of the board of the New York Urban League, WNET/Channel 13, the Historic House Trust of New York City, Big Sisters, Inc., and the Early Stages Theater program. She was also an honorary member of the Black Health Research Foundation, and a member of the New York Bench and Bar Spouses, Inc.”

Through all these endeavors, Joyce continued to embellish her partnership with David, as former Congressman Charles Rangel noted in an interview with Michel Marriott in 1990. “He’s never had to consider whether he had the support of Joyce,’’ he said ‘‘She is not a politician, but a partner, and a partner has a different role.’’ She knew how to fulfill her duties without losing sight of being a mother and taking care of family affairs, Rangel added.

Besides her lifetime membership in the NAACP, she was a member in good standing of Howard University’s Alumni Association, and closer to home she had an unwavering commitment to the Harlem Congregations for Community Improvement, dedicating the first green, affordable housing development in the city as the Joyce and David Dinkins Gardens. To that end their union continues to flower.

The Dinkins family thanks everyone for their comforting thoughts, prayers and expressions of sympathy. In lieu of flowers, contributions/donations can be made to: Howard University Scholarship Fund, Joyce B Dinkins Children’s Collection at Schomburg Center for Research in Black Culture and the Calvary Hospital Hospice Care.