A.V.O Boyz: The journey before ‘Black is King’ 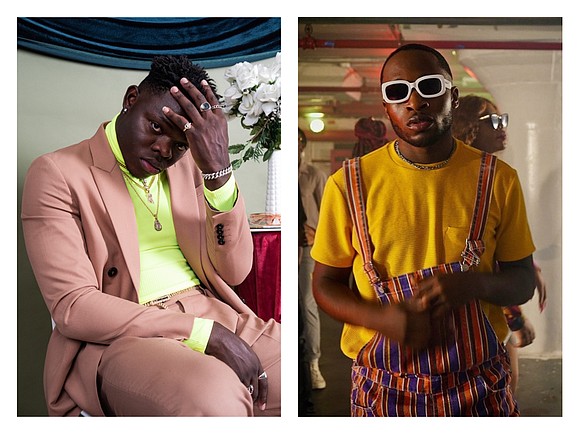 In the late summer of 2014 after their first gig, Stephen “Papi” Ojo, his older brother Emmanuel also known as Sedo, and their best friend Caleb Bonney were brainstorming on their train ride back home, wondering what to call their newly found dance group. It was only after multiple failed attempts of looking at ads in the train cars and silly word combinations that they settled on A.V.O (Africa’s Very Own) Boyz.

Beyoncé’s “Black is King,” a musical film and visual album based on the 2019 album “The Lion King: The Gift,” helped to further introduce the Afrobeats dance group to an audience that was unfamiliar with their already growing reputation in the industry. Their involvement in “Black is King” started with a mysterious call for Ojo while he was in the gym and a random follow on Instagram from renowned choreographer Jaquel Knight for Bonney. Knight’s team reached out to Bonney through email asking if he was available on certain dates for a big project whose details cannot be fully disclosed yet. “Then I get a call from Stephen, ‘Yo Caleb! I think we’re about to work for Beyoncé!” Bonney recalls. On the phone they were able to put two and two together about who they’d possibly be working with. “They were like ‘Can you be at the airport this very evening?’ and we were thinking, it’s all going so fast! Like, can we do laundry?” Bonney laughs as he explained they left the next day for Los Angeles.

Playing the role known as “The Blue Man” in Beyoncé’s “Already” which features Ghanaian singer-songwriter Shatta Wale, Ojo represented an African prince’s subconscious to lead him back to his rightful throne. Before any dance routine was made, the guys told Knight about choreography they made to the song a few days ago for a class they were teaching. After showing him the class footage, they taught it to him and tweaked some moves for easier understanding. After teaching Beyoncé the dance, they also taught her Nigerian dances such as the Gbese, Poco, Kpakujemu, C’est Moi dance (Ivory Coast), The Network (Ghana) and more from different parts of Africa, even including elements of dancehall.

From working with artists such as Beyoncé, Teyana Taylor, Janet Jackson, Rihanna and more, Africa’s Very Own Boyz continually make the community proud. However, their humble beginnings and the tragic loss that took place before the mainstream breakthroughs are what truly catapulted them to new heights.

Nigerian born brothers Stephen and Emmanuel moved to Brooklyn in 2008 with their family. They stayed in East New York where things were rough at the time. “We went from the airport straight to Flatbush and we were like, whoa…” says Ojo. After attending a church in the neighborhood for some time, that’s where they met Bonney, who is of Ghanaian descent. “Less than a year after forming A.V.O Boyz, we booked a music video gig with Afrobeats star Banky W.,” says Bonney. The group’s buzz within the African community continued to grow as they became acquainted with Nigerian American disc jockey DJ Tunez, working with Banky W., going to the Nigerian Day Parades and parties trying to get their name out there.

Devastation hit in 2016 when one of the core group members, Emmanuel, drowned in a pool saving the life of his younger brother. Emmanuel was 22-years-old. “I remember the ride back from the hospital that he had gotten flown out to,” said Bonney. People were praying heavily for a miracle because doctors were saying there was no more hope for Emmanuel.

“I texted the A.V.O chat like, ‘Yo, it’s really not going to be the three of us anymore?” remembers Bonney. “I remember typing that and just tears falling down the screen. It took a lot of prayers for Stephen and I had to pray for myself as well.” This tragic incident brought the African community from different religious backgrounds together as a family to pray and embrace each other. “Muslims and Christians were praying together in one accord. That’s how much of a thing Emmanuel’s death was back in 2016.”

“When my brother passed, we stopped dancing. I stopped dancing, Caleb stopped dancing and A.V.O was at a point of being dissolved because we just lost a core member of the group and it just wasn’t the same where rehearsals were just the two of us,” said Ojo. “When we first started getting back into dancing we were still in that mindset of us being three. That when we started creating, we were still creating ideas, moves and concepts for three people and then we’d have a reality check that it’s not three anymore, it’s two now.”

Late 2017 is when A.V.O started picking dance back up again and teaching classes sporadically. “Sedo would want us to keep dancing because he loved dancing,” states Ojo. “We have to keep the mission going, we have a purpose we want to fulfill.”

Right after coming back into the dancing scene and teaching classes sporadically, the guys booked their first big show, performing alongside Rihanna, DJ Khaled and Bryson Tiller at the 60th Grammy Awards in 2018. “Right after that performance was over, my phone was like a hot potato,” laughs Bonney. “Notification here, notification there. Earlier that night before we performed live and dropped the news, everyone was like woah because like, this has never been heard of on such a mainstream scale like that in the community.” The big talk during the “Wild Thoughts” performance was Rihanna doing the Gwara Gwara, a popular South African dance taught to her by Ojo and Bonney during rehearsals. “We got to showcase Afro vibes with Rihanna on a stage like that.”

In addition to dancing, the A.V.O Boyz are no strangers to other creative outlets. Recently just releasing his new song, “Beremole,” Ojo reflects on his love for music. “I always wanted to do music but was always insecure about it.” he said. He is also taking his acting more seriously and starred in a short film called “Privilege.” Bonney also refuses to be boxed in as just a dancer. “I’m a creative and always have things bouncing through my head. You’ll definitely see me venturing into other things. Dance, fashion, entertainment. I’m a creative first so just be on the lookout.”

Bonnet and Ojo both promise that this is not the last that you would hear of them. They want to be remembered as authentic young men who are continuing to leave a positive impact on the world. “You can come into this world and just live but I don’t believe that’s God’s ideal will for anyone,” states Bonney. It’s important to them to not just build a legacy for their family, but also other creatives, in New York, Brooklyn and Africa as a whole. Bonney continues, “There’s more to be done, more that will be done and no one should ever get comfortable with where they are. “We’re going to shake the room as Pop would say.”