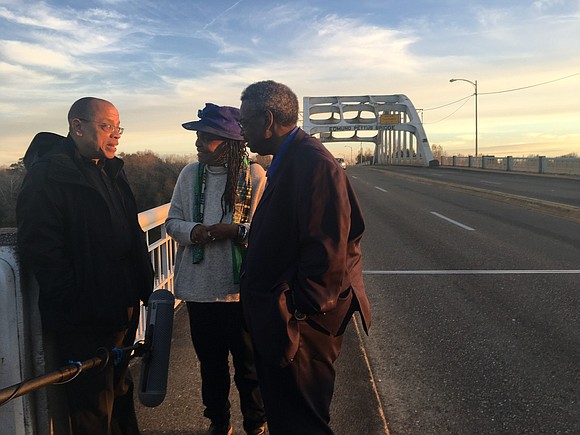 Oft repeated over the past five years in response to the latest incidence of racism, “This isn’t who we are” is arguably the most disingenuous phrase uttered by Americans today. Filmmakers Emily Kunstler and Sarah Kunstler go to great and deliberate and intentional lengths to make sure viewers of their film think before uttering that inanity.

“Who We Are: A Chronicle of Racism in America” is a feature length documentary based on a groundbreaking lecture given by ACLU Legal Director Jeffery Robinson in 2018. It recently made its world premiere at the annual South By Southwest Conference and Festivals, held online this year. Robinson’s videotaped talk intercuts archival footage, images and numerous on-site interviews.

The film documents how the foundation of the American economic system was built on white supremacy and its main beneficiaries’ use of ruthless brutality to make sure it stays that way. More specifically, it examines the ways that white supremacy interacts with Black people.

Robinson implies that many are unwitting participants in sustaining the system. It’s imperative, however, that they make themselves more aware, and work to resist, not enable it.

Robinson, at one point, quotes the Kerner Commission Report. “…The deepening racial divide is not inevitable. The movement apart can be reversed. Choice is still possible. Our principal task is to define that choice and press for a national resolution. Pursuing our present course will involve, ultimately, the destruction of basic democratic values.” “Who We Are” urges each viewer to finally make that important choice.

Robinson starts out rhetorically asking the audience if any of them ever owned slaves. Then goes on to explain, “It is our shared history and when we try and make more light of it than it was then we are denying who we really are and are impeding our ability to truly move forward as a nation.”

The film highlights several of white supremacy’s pillars: law enforcement, which originated in America with the slave patrols, domestic terror embodied by activities of most associated with groups such as the Ku Klux Klan, policies of the federal government such as the Federal Housing Authority’s redlining, the educational system’s selective discussion of history, symbols of white supremacy in our environment such as Andrew Jackson on the $20 bill, monuments, and monumental structures such as the Edmund Pettus bridge, named for the ferociously pro-slavery U.S. senator and head of the Alabama Ku Klux Klan.

There are numerous disturbing, wrenching moments as Robinson pulls no punches, delivering unvarnished facts. One haunting sequence features contemporary video footage of a street in Tulsa, taken it seems from a moving vehicle. It looks much like a park. However, what looks like porch steps jut out every few feet. We learn that Tulsa residents call them “the steps to nowhere.” They’re remnants of razed homes owned by Black residents, many of whom were murdered in the Tulsa Massacre. Others escaped the city and never returned.

Robinson speaks with the mother of Eric Garner, the daughter of lynched businessman Elmore Bolling, the sister of Larry Payne, shot in cold blood by a Memphis police officer a week before Martin Luther King was murdered there. Their frustration and grief is still palpable after so many years.

Robinson also conducts “man-on-the-street” interviews with those holding “another point of view.” One man, bearing a confederate flag, tells Robinson slaves were treated “like family.” Robinson doesn’t forcefully argue with him. He takes the viewer on a visit to the Old Slave Mart Museum, where shackles created to fit toddlers are on display. Robinson also recites portions of an advertisement written by former President Andrew Jackson, promising a bonus for each 100 lashings given to his runaway enslaved person by whoever finds and returns him.

It's almost a trope now in documentaries that deal with American racism to tell stories about experiences with racist microaggressions. In Robinson’s case he recalls when soon after moving into his new home as a child, his neighbor promptly U-turned the welcome wagon (and plate of cookies) upon finding out his Black mother was the woman of the house.

Stories like these that prioritize politeness over behavior, giving a veneer of being humane, whereas keeping the focus on the system itself is more important.

Where the use of personal story is more effective is in giving the viewer a solid sense of Robinson’s inner self: his decency, intellect, humility and passion.

Robinson also compellingly uses personal stories to include white friends and acquaintances who helped shape his journey. Particularly resonant is a scene where he reconnects with his white childhood friend and schoolmate Opie, and Opie’s father Richard, their school’s basketball coach. Filmed seated around a table at their old school, they all fight back tears as Richard reveals for the first time, the reason he ordered the team to leave one of their basketball games as soon as they arrived. He had made up an excuse at the time in order to spare young Jeffery. These and other personal histories he shares illustrate in a concrete manner there is in fact hope for changing the system.