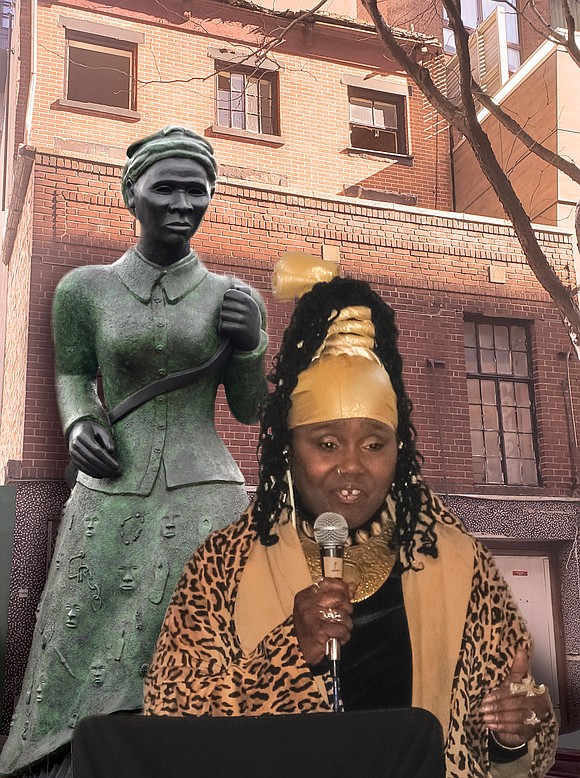 After 17 years of struggle and fighting, 227 Abolitionist Place (formerly Duffield Street) in Downtown Brooklyn, an historic site in the abolition of slavery, has been saved as it became a city landmark.

Just in time for Black History Month, the New York City Landmarks Preservation Commission (LPC) recently designated the building an individual landmark. The row house belonged to Harriet Lee and Thomas Truesdell, who were active in abolitionist work before the Civil War.

The couple resided in the home from 1851 until 1863. It is believed to have been a stop on the Underground Railroad for Blacks escaping slavery in the South in search of freedom in the North ––in places like upstate New Yok and Canada. Brooklyn at the time was known as a haven for freed Blacks and the abolitionist movement. The property remained in the Truesdell family until 1921.

In 2004, late community organizer and activist Joy “Mama Joy'' Chatel owned 227 Abolitionist Place. Chatel lived in the building and ran a hair salon. Then-Mayor Michael Bloomberg zoned the area for a park and underground parking garage through eminent domain. After a failed attempt to discredit the home as a key part of the abolitionist movement, large underground tunnels beneath the home proved otherwise.

In 2007, advocates and community leaders created Abolitionist Place, an official street renaming of Duffield Street between Willoughby and Fulton Streets. Chatel and groups including Friends of Abolitionist Place, Equality for Flatbush and FUREE (Families United for Racial and Economic Equity) raised awareness about the home’s history and fought for permanent recognition. Chatel passed away in 2014.

Today, sitting among a concrete jungle of newly constructed buildings and expensive high-rises, 227 Abolitionist Place remains in its original, untouched form with hopes that it will now be converted into a space for the world to learn about New York City’s involvement in ending American slavery.

Speaking last week at City Hall, Chatel’s daughter, Shawné Lee, said in an emotional speech about her mother that she will continue to fight on her behalf to preserve 227 Abolitionist Place.

Activist and historian Raul Rothblatt has been part of the fight to make 227 Abolitionist Place a landmark for the last 17 years. He said that landmark designation is proof that people truly care about the historical connections New York City had in abolishing slavery.

“This is not just a building we are saving, it’s a whole community and a movement and a family associated with it,” Rothblatt told the AmNews. “This history was ignored back then and it’s important today. It almost got demolished and it really feels like a continuity of activism. We’ve lost so many times that it’s strange to win. It’s hard to believe that we’ve actually won because we lost so many times. It seemed like such a long shot for so long.”

“The Landmarks Preservation Commission is committed to telling the story of New York City’s African American heritage and experience and is prioritizing designations like the Harriet and Thomas Truesdell House as part of its equity framework,” said LPC Chair Sarah Carroll. “The Harriet and Thomas Truesdell House represents the important role the city played in the efforts to abolish slavery.”

Tricia Olayinka Ben-Davies is a member of the organization Friends of Abolitionist Place and joined the fight to save the building.

“This is our inheritance,” Ben-Davies told the AmNews. “Black history in American history. When we don’t teach that history, we all lose and miss out on the richness. It’s like we miss out on the truth because it’s so dark. Children deserve to be able to learn about the history of resistance. Brooklyn was the hub of this abolitionist activity and these people were the one’s putting their lives on the line hiding slaves in their houses. That’s history that deserves to be told.”

Over 40% of New York City households owned slaves during the colonial period. Slavery was abolished in New York State in 1827 after 200 years. There were 15 stops in the city along the Underground Railroad. Brooklyn City Council Member Laurie Cumbo said the city was “pinnacle” in the anti-slavery movement.

“In order to amplify Black narratives, we must amplify Black History,” she said. “The Underground Railroad is a critical part of that history and it is only right that Brooklyn is home to one of its many New York stops.”

Brooklyn Borough President Eric Adams said that while small in size, 227 Abolitionist Place is a critical site in America’s history.

“We joined a campaign to preserve the historical integrity of 227 Duffield Street––to show that the Black lives of freedom-seekers mattered, and still matter to this day,” Adams said. “At a time when our nation continues to face a reckoning over the long and painful legacy of racial injustice, remembering and permanently enshrining these pieces of our history has never been more urgent.”

Public Advocate Jumaane Williams also advocated for the building to be designated a landmark. He noted that there are other buildings in the city connected to the abolitionist movement that needs landmark preservation.

“227 Abolitionist Place, home of the Truesdells, is a major victory, but we must expand on this progress and preserve other sites in the Abolitionist movement, such as the home of renowned abolitionist Dennis Harris at 857 Riverside Drive––which is facing imminent demolition,” he said. “This is a moment to establish and educate New Yorkers on a fuller understanding of the city's historical role in slavery and modern mandate around systemic oppression and racial injustices."

Attorney General Letitia James has been fighting to preserve 227 Abolitionist Place since she was on the City Council. In 2007, she passed legislation to rename the block on Duffield Street, where the house sits ,as “Abolitionist Place.” She also stopped the city from tearing down the structure for new development. In 2020, she testified before the LPC about the importance of designating the site as a landmark.

“During this time of national reckoning over the legacy of slavery and continued injustice faced by Black communities, maintaining that piece of history is critical in remembering how far we’ve come, and how far we still must go,” she said. “Since my time in the City Council, I have fought for the protection of this important site, and now I am immensely proud that during Black History Month, we can finally say it’s here to stay.

Mayor Bill de Blaiso said that the city could not afford to lose 227 Abolitionist Place. He said history sends a message about the truths that need to be uncovered.

“The battle for justice in this country always has been––and always will be––fought in the heart of New York City,” said de Blasio. “Black History Month in this city means more than just words. It means honoring the legacy of the Black New Yorkers who came before us. I’m grateful to every advocate and community leader who made this day possible, and this city will continue to stand with you in the future.”