Fidel was 'A strong voice for social justice,' a U.N. Secretary-General 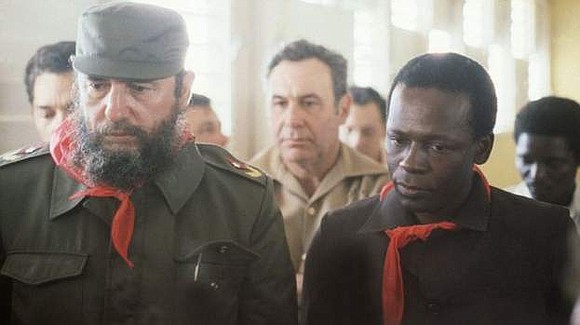 FIDEL WAS ‘A STRONG VOICE FOR SOCIAL JUSTICE,’ U.N. SECRETARY-GENERAL

(GIN)—U.N. Secretary-general Ban Ki-moon extended sympathies to the Cuban people on the passing Friday, Nov. 25, of their longtime president, Fidel Alejandro Castro Ruz, who he called “a strong voice for social justice.”

Admired by leftists and people of the developing world as a revolutionary champion of the poor, the former president died at the age of 90. Monday, tens of thousands of Cubans, some wrapped in red, white and blue Cuban flags, lined the streets from Havana to Santiago de Cuba as a funeral cortege made its way across the country, carrying the ashes of the renowned leader.

Speaking to reporters at a conference in Turkmenistan, Ban praised Fidel Castro’s advances in the fields of education, literacy and health.

“As prime minister, president, commander of the Cuban Armed Forces and first secretary of the Cuban Communist Party, his role at the helm of Cuba spanned nearly 50 years, during which he left a major imprint on his country and on global politics,” said the U.N. chief. “His revolutionary ideals left few indifferent. He was a strong voice for social justice in global discussions at the U.N. General Assembly and international and regional forums.”

He continued, “I offer the support of the United Nations to work alongside the people of the island.” He added his hope that Cuba “would continue to advance on a path of reform and greater prosperity.”

The U.N.’s General Assembly president, Peter Thomson, called Castro “one of the iconic leaders of the 20th century… an inspirational figure for developing countries in particular,” adding that “his dedication to their advancement, especially in the fields of education and health, would be long remembered.”

After Cuba’s first venture into Algeria that ended French domination there in 1962, Cuba under Castro “went on to support the various anti-colonial movements in Africa,” said Fletcher. “These included, in particular, the anti-Portuguese movements in Guinea-Bissau, Angola and Mozambique. And (the Cubans) were unquestioning in their support for the anti-apartheid struggle in South Africa.”

It was the “unwavering commitment of Fidel Castro to Namibia’s freedom that led to the destruction of apartheid in the country,” said Namibian leader Hage Geingob.

The late Castro had no interest in the natural resources of a free Namibia,” recalled President Geingob. “Nor did Cubans come to collect gold and diamonds. Instead, Castro offered an education to more than 3,000 Namibian children, many of whom today occupy influential positions in all sectors of the economy.”

(GIN)—Geologists at the Africa Earth Observatory Network fear that a nuclear power station built over canyons in bedrock, as proposed by South Africa’s state-owned utility Eskom, is at risk from deadly surge storms and tsunamis—not unlike the meltdown at the Japanese plant in Fukushima caused by the tsunami in 2011. Eskom disputes the findings.

“If you’re going to build anything on that, it’s pretty prone to storms, sea level rises and tsunamis,” said professor Maarten de Wit of the Nelson Mandela Metropolitan University and director of the observatory.

In their new report, the observatory also showed that seismic activity along dormant fault lines near the site could trigger submarine landslides.

Eskom is pushing for the South African government to bring a new nuclear power plant online by 2025, as part of a larger rollout of several nuclear plants, to meet energy demand.

Groups opposing the nuclear reactor include Earthlife Africa and the Southern African Faith Communities’ Environment Institute.  Objections include the plant’s estimated cost (more than $5 billion), secrecy in the planning stages and a suspicion of corruption.

The group GroundUp complained of the Russian-built plant’s “astronomical cost” and said they support a lawsuit filed last year by Earthlife and the Faith Communities’ institute that challenges the constitutionality of government agreements for procuring nuclear reactors.

Two years ago, it was revealed that the Russian nuclear agency Rosatom had secured the rights to build a fleet of South African nuclear plants at a total cost of $50 billion. The South African government claims the news was inaccurate.

A series of media investigations, however, reportedly uncovered evidence that individuals close to the president and groups linked to the ruling ANC have financial interests in the matter. Also, the deal seems to hold only South Africa liable for accidents at power plants, will run for 20 years and will give Russia the right to block its partner from naming anyone else to work on the same project.

South Africa and Russia have a 10-year relationship in nuclear research that is currently set for renewal this month.