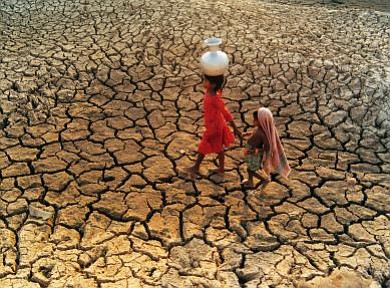 The state-owned Ghana Water Company Ltd. has announced that because of severe dry winter winds (called harmattan) and the drying up of rivers, water deliveries will be rationed over the coming months while the country awaits the rain.“We are sorry to inform the consuming public that the situation has led to intermittent water supply in most cities and towns in the country,” said Stanley Martey, communications director of the national company. The rate of evaporation of water bodies nationwide has become alarming and there will be consequences for some communities, he said.

This decision has not gone down well with the government. A briefing has been demanded by parliamentarian Sampson Ahi on the water crisis.

In addition to blaming bad farming practices, the illegal felling of trees and illegal small-scale gold mining, the water company cites pollution of the country’s water bodies for the shortages.

In a recent interview with the Daily Graphic in Accra, Martey revealed that with the exception of the eastern and the Ashanti regions, all regions in Ghana will have water rationed.

But Martey might have been putting the best face on an already dismal reality. Most of the rivers in the northern region have dried up completely, residents told Martina Bugria, a reporter with Joy News. The situation has forced residents to trek several miles for water that is often polluted by animal waste.

Martey dismissed charges that Ghana Water Company was responsible for the dire water crisis. “The resource is unavailable or depleting at a fast rate,” he declared. But despite the urgency of the crisis, there is no national rationing plan.

“Every region has its own peculiar problems, but a timetable will soon be provided to guide consumers as to when taps will be opened or closed,” he said.

“No community will go without water for [more than] two days,” he promised, assuring that in the third day “there would be water.”

Meanwhile, some 23.1 million Ghanaians, representing 73 percent of the 27 million population, are using water that does not meet the benchmark of Sustainable Development Goal requirements of at-home availability, reliable and contaminant-free drinking water. Only 3.9 million Ghanaians have access to drinking water from an improved water source that is located on premises, available when needed and free from fecal and priority chemical contamination—the standard SDG requirement.