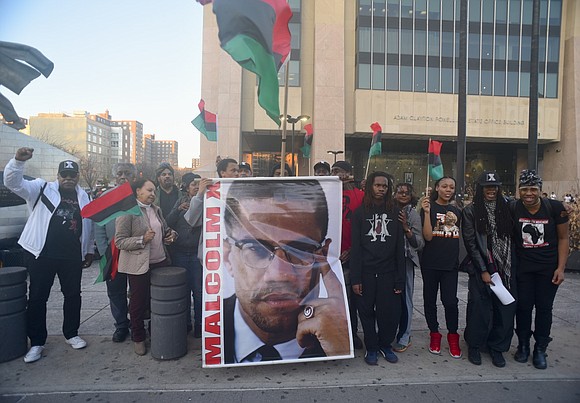 Marchers gathered on the corner of Adam Clayton Powell Boulevard and 125th Street, Harlem, before walking to a community commemoration at All Souls Episcopal Church on St. Nicholas Avenue, with banners and chants of “Malcolm lives.”

At the National Black Theatre, Ilyasah Shabazz, third of Malcolm X and Dr. Betty Shabazz’s six girls, attended an event paying tribute to the leader. The, author, social activist and motivational speaker hosted the Smithsonian Channel and the theater’s private screening of “The Lost Tapes: Malcolm X.” Presented entirely through his speeches, newscasts and rarely seen archival footage, “The Lost Tapes: Malcolm X” tells the story of the man who, “by any means necessary” was willing to—and did—put his life at risk to bring change and equality to Black America.

“To Attallah Shabazz, El Hajj Malik El Shabazz’s (Malcolm X’s) oldest daughter and my good friend, my heartfelt love and prayers go out to you and your family,” said Assemblyman Charles Barron. The activist and elected official told the Shabazz family through the AmNews, “While we lost a powerful revolutionary icon, you and your sisters lost a loving father. We must always remember that! Long live the spirit of Brother Minister Malcolm X! Long live the spirit of Sister Dr. Betty Shabazz, his beloved wife! Stay Woke and ready for the revolution.”

In a post “Black Panther” movie world suddenly engaged in a populist notion of movement and activism inspired by Wakanda-isms, and prolonged fights for civil and racial justice, and a new focus on Black Panther Party activists still incarcerated after 30 to 40 years, dedicated organizers are renewing the call to recognize those who have contributed to a new protest era—with young people taking up the call to address myriad injustices.

“We are keeping the legacy of Malcolm X alive, taking our struggle to the streets with our people,” said activist and writer Amadi Ajamu. “It is part of our work to highlight injustice from colonialism to ethnic cleansing in our communities mislabeled as gentrification.”

At press time as folks gathered at the statue of Adam Clayton Powell on 125th Street, Ajamu told the AmNews, “We marched in Harlem to show that on the very streets where he made his call to our people

“Brother Malcolm X Shabazz gave my generation the spine to stand up for our freedom from the racist domination of white American society,” said writer Saeed Shabazz. “His message was just ‘what the doctor ordered’ because we were searching for our backbone, and he said it was all right to look white folks in the eye and tell them we weren’t willing to be slaves to their system. So, it bothers me that so-called educators in 2018 are telling the grandchildren of my generation that they need not honor Brother Malcolm X.”