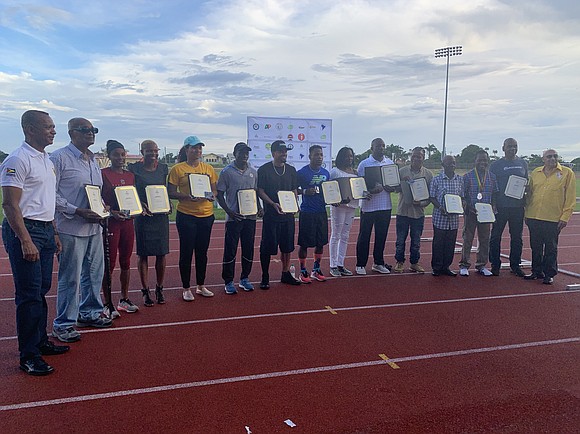 The Aliann Pompey Invitational in Georgetown, Guyana, named for the country’s four-time track Olympian, recently had its fourth edition. The fan base has continued to grow as has the level of competition. Pompey, an assistant coach at St. John’s University, wanted to bring international competitors to the track meet and also provide exposure for the country’s young talent eager to earn U.S. athletic scholarships.

Although she was greeted with enthusiasm from the Invitational’s inception, Pompey had been concerned whether the track meet would have staying power. “There have been meets in the region that didn’t quite make it past year three,” she said. “The feedback I got from the sponsors and the athletes was really positive. I’m thrilled for year five. We’ve started talking about what we would do differently and how that would look. It’s almost safe to say it’s a fixture now.”

Among the competitors was Joanna Archer, who will be a sophomore at Monroe College this fall. Arinze Chance from the University of South Carolina won the men’s 400 meters.

This year’s meet included a tribute to Guyana’s Olympians. Finding people was not easy, but Pompey persisted. Several of the athletes—ranging from Geoffrey Sankies, a judo competitor in the 1960s, to 2016 Olympian Aliyah Abrams, a 400-meter runner just like Pompey—met with Prime Minister Moses Nagamootoo.

At the meet, local athletes were able to share the space with talent from high profile track countries such as Trinidad and Jamaica. This year, there was a high school relay, which thrilled the participants. Pompey, a graduate of Manhattan College, is continually trying to find where there are gaps and fill them as efficiently and effectively as possible.

“The main part of it was about providing that platform and giving people the opportunity,” said Pompey. “Enough people jumped on board for it to be a success. The athletes have clearly benefitted.”

She continued, “Every year, we’re getting closer and closer to a Diamond League budget. We’re a couple of years out, but that’s the direction we want to go.”

Immediately upon returning to New York, Pompey was back to work as a college coach. Last week, St. John’s welcomed USA Track & Field’s Coaching Education School to campus. Pompey was one of 250 coaches from around the country who attended USATF’s Level 2 program. After participating in each event session, giving a presentation and passing a final exam, she receiving Level 2 certification for sprints, hurdles and relays.